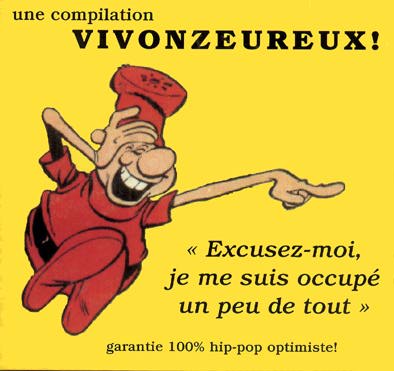 I roam bargain bins very often and I buy a lot of records that way. Otherwise, I would have needed to be a millionaire to buy all the records I own at full price !

Bargains and sales are good, but sometimes fastidious : you browse through hundreds of records to find maybe just one of any worth - if you're lucky - because you're never sure you're not going to come back home empty-handed. And as you're getting old, it can get tiring (bargain bins are by definition placed in the least accessible parts of shops).

And often, while I'm browsing through these records, the bad ones, those I might have been interested in when they came out but don't interest me at all three years later, the good ones that unfortunately I already have, the unknown self-released ones, the major-produced ones the journalists were flooded with before they sold them to second-hand shops, the Then Jericho and Hollywood Beyond records which seem to resurface everywhere... often I'm amazed by the prodigious number of records released and I wonder if it is of any use for a band or a label to throw a bottle to the sea by releasing a record which can't be anything but one more drop in an ocean of plastic.

All those nice thoughts and here I am releasing a compilation with the 5th printed issue of Vivonzeureux!

Yes, I am aware that, without distribution, this record has no more chance to be heard than the fanzine has to be read, but that's not a problem, because it's precisely for the few who read the fanzine that this record exists.

After a while, you begin to wonder : it's OK to write all the good you think about the music your friends make, but what's the use if after some time your friends are still making their cassettes or CD-Rs on their own and no one hears them ? So at least this compilation gives the fanzine readers a chance to hear this music (especially as I know that you, readers, are often too lazy to order the self-produced records!).

And then, somehow, compared to to the label promos which are supposedly "not for sale" but are crowding the bargain bins, this compilation is truly produced outside the industry : only 500 copies were made, there won't be any advertising campaign, it won't be sold in shops, and the asking price covers only the costs for making the fanzine and CD.

So, if you own this records, it's either because you have bought it, or you've been offered it, or you're one of the few journalists selected to receive it.

I cross my fingers hard, but I hope never to chance upon this record in a bargain bin, and you can help me : if you don't like this CD, don't sell it to a shop which'll buy it for a tenth of it's worth, just give it as a present to a friend or to your little brother...

Thanks to all those who took part or gave a helping hand.
Cover illustration : Rigolus by Cézard, nicked on the cover of issue n° 13 of Pif Gadget ( may 1969).
The title phrase was pronounced by Karine one evening in July 1999.

One night about three years ago, I was playing the latest Gamover cassette for M. Untel, the more or less globe-trotting troubadour. Like me, he loved the sound collages of the more or less recluse D.J., took down his phone number and got in touch with him. "Je reste club" is the product of their meeting : M. Untel added his guitar, keyboard, the verses of one of his songs and a minimalist chorus to a rhythm and sounds put together by Gamover. This is more like the recipe for a hit than the recipe for a musical bouillabaisse !

Kara writes her songs, accompanies herself with her bass guitar and sings them. After a starkly produced first demo, she enrolled Le Vieux Thorax, who transformed this household lament into kitchen drum'n'bossa. A perfectly balanced association !

3. THE JASMINE MINKS : blown away

I saw The Jasmine Minks live for the first time in March 1984, at the time their first single, "Think!" , was released on Creation. They played twice in Reims, at the end of 1984 for their first european tour, and in 1987. The band dissolved little by little, labelless, after the release of their fourth album in 1989. Since 1998, although its members are scattered all over Great Britain, the Jasmine Minks have reunited, first as a duo with Jim Shepherd and Tom Reid. After a demo and a few gigs, the band returned to the studio in spring 1999 to record three songs for a forthcoming single or album. "Blown away", a Brian Wilson-like lullaby, is one of these three songs. It is presented to you exclusively before its official release thanks to the friendship of The Jasmine Minks.

The Jasmine Minks were not born to let time go by !
Here's the accompanying message to their come-back :

This song stands as one sign of something special, something pure. An expression of work, Art and Love (our W.A.L.) that comes straight from the heart and soul of like minded individuals who grew up disenfranchised, disillusioned but yet forever passionate through Maggie Thatchers era and who, as we tail out of the '90's feel further let down by the lack of the new British Labour Government to make any real change to the old Tory ways.We fly our flag of defiance once again, before yet another generation gets washed down the drain. So here's to the new where nothing is old. We pin our heart's firmly to our WAL. We are the same as millions of others. God isn't this world sad at times. Too many of us isolated or isolating ourselves.

Jasmine Minks - Think Tank
The Jasmine Minks are a group of people who have the same passion and verve about a range of things, but with music and words in particular. A variety of skills are used in the Jasmine Minks, from organizing web sites, jabbering excitedly for hours about a latest project and writing music and words, to the use of general enthusiasm in our everyday lives, spreading the name and ideas of the group.10 years is a long time, but the 80's came to an end with such a climax, with the impending fall of the Berlin Wall, Nelson Mandela being released and the demise of Thatcher and the poll tax, that it seemed pointless and almost insulting for a pop group to be running side by side with these major events in the world at large. What was needed was a tribute to people all around the world in their effectiveness in surviving the most frightening decade since the last world war.We were wrong! What people need was not our say-so and if there are enough people trying to change their world through their everyday actions in work, art and love without us proselytizing, then great. But we will anyway, cause that's our way of expressing what we do best! What have you got to say?

Among the 18 tracks on the "Grain" album, I chose this one because it's perfectly typical of the music this guy Dorian Feller makes : an un-pigeonholable UFO, tackling at the same time jazz and new wave, rock and chanson.

Among the dozens of bands Jean-Marc Wadel has played with are Les Arajas, A Gethsemani and Les Azteks. These days he plays r'n'r with The Torso Twisters, literate chanson with L.W., and he recorded in summer 1998 a mostly instrumental unreleased album, as T.V. La. S.Un. Or., a duo with Manuel Bigot. It's some sort of musical travelogue, reminiscent of Calexico, Durutti Column or Gastr Del Sol.

These last few years, Les Grandsgourous were called Omar m'a tuer. They were probably the only band in the world who covered The Monochrome Set, The TV Personalities and Giant Sand all in the same concert. "Décalcos de Mexico" is a sombrero nod full of admiration addressed to Calexico...

In 1997, Gamover released a cassette on which he collaborated with many people. Like "Je reste club", "L'alerte au gros rouge" is taken from this cassette. L'Incohérent (star DJ of La Radio Primitive, ex-vocalist with Les Combinaisons and Les Morveux) has tranformed an instrumental titled "Red alert" into this deadly reggae-punk track, by adding his lyrics and his vocal performance.

Like those by Gamover, the tracks that Le Vieux Thorax assembles in his home could be considered like odes to the Amiga, this antique sampling/sequen-cing computer which is their favourite instrument. "Easy love bpm" is a very good illustration of what you can produce with these tools, if you know how to put them to good use !

Sometimes, when Dorian Feller and L'incohérent meet, they record songs together. At least, this has happened twice in ten years. The main sound sample used on this song is said to be the tone of an answering machine !

If all goes well, you should be able to listen to mp3 song clips from the compilation by clicking on the titles (it is rather lo-fi, nothing to compare wih the sound quality of the CD...) :