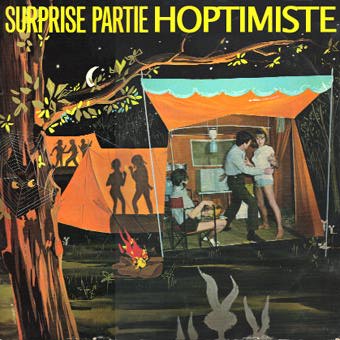 So, a few years after "Excusez-moi, je me suis occupé un peu de tout", Vivonzeureux! is happy to present you with our second compilation. But the times they are a-changing. This time, no CD presses in Austria through a middle-man from Bordeaux, no CD to send by post, no unsold stock gathering dust in the attic, and more importantly, no cut in the savings we don't have anymore. All this because our compilation is completely free and available in the form of downloadable MP3 files.

But this time, we have special guest stars, among whom Howe Gelb, who supplied us with a song unreleased on record, "Creakin' chair", which was previously only available through his website. This track featured originally on a 5-track CD-R that Howe had sent to the "Comes with smile" magazine for them to choose a song for the CD that comes with the magazine. Hideen treasures like this, many would love to have them under hand to include on their official releases. But Howe probably has hundreds like as good as these lying around the house. Dogbowl also offered an unreleased track, "Ecoutez-moi", recorded live and sung in French, if you please ! This is all the more of an achievement as we know that Dogbowl, an American who has been living in France every other year for quite some time now, still has sometimes difficulties to use French, but here pulls it off wonderfully with this song improvised on the spot. From his retreat on a Scottish near-island, Sandy Burnett, aka Jim Shepherd from The Jasmine Minks, gave us a folk-tinted instrumental.

But we have lots of new friends on this new compilation. Ray's Vast Basement is a band from San Francisco. They're one of the many bands we discoveered through Epitonic, a website that supplies free legal MP3s. Their album "On the banks of the time" tells the fascinating story of a cave in Drakesville, from -100,000 BC to our days. The bdan members met when they all rented trailers on the ranchouse that has the cave on its grounds. the very year that saw France vote Chirac more than it ever did before, Les Beaux Bizarres admit they voted Mitterrand ! (and he's been dead seven years now...) This song will feature on their soon-to-be-released first album. As for the Boum Bomo's album, it's been available for quite some time now. "Tribute à zéro" reminds us of the very short period when all of us in France worshipped singer Miossec. Ah, nostalgia when you take hold of us... Le Népalais pays a tribute too, but to Dogbowl (oh oh...). This might not surprise you once you'll know that it is apparently a Dogbowl concert at the MJC Claudel in Reims that prompted Le Népalais to step out and become a singer-songwriter too !

+++++
The featured artists have all given away their track for this compilation. If you like their music, please try to buy one of their available records.

How to use : Download the MP3 files from the list below onto your hard drive. If you want to, use your CD-burning software to convert the files and burn your own audio CD-R. In that case, use the supplied link to download the cover art and print it. use some scissors and glue and that's it, you have a nice homemade compilation !